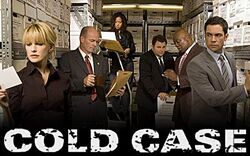 This article contains information for the third season of Cold Case. It ran from September 25, 2005 to May 21, 2006 for 23 episodes. This was last season to air in its original timeslot of Sundays at 8 pm.

In order of character appearances:

In order of character appearances:

*Tracie Thoms is listed as 'guest cast' in 4 of the 15 episodes she appears in.

Retrieved from "https://coldcase.fandom.com/wiki/Season_3?oldid=28214"
Community content is available under CC-BY-SA unless otherwise noted.